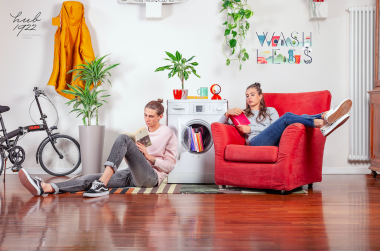 The textile industry, one of the major industrial sectors worldwide, is going through a significant revolution, with changes taking place in various sections of textile processing. Biotechnology and biomimicry, for example, are continuously playing an important role in redefining the influence of the textile industry on society, and so is progress made in auxiliary chemistry, with advances investigated and then applied in almost every section of textile processing.  The outcome is amazingly promising.

Modern, real science is inextricably intertwined with environmental consciousness and they are definitely not mutually exclusive.

The textile industry, one of the major industrial sectors worldwide, is going through a significant revolution, with changes taking place in various sections of textile processing. Biotechnology and biomimicry, for example, are continuously playing an important role in redefining the influence of the textile industry on society, and so is progress made in auxiliary chemistry, with advances investigated and then applied in almost every section of textile processing.  The outcome is amazingly promising.

Modern, real science is inextricably intertwined with environmental consciousness and they are definitely not mutually exclusive.

At RUDOLF GROUP modern, real science means pushing R&D so to constantly explore new technology and innovations that help transform the textile and fashion industries. We work to reduce the overall dependency on traditional and virgin resources.  Getting textile manufacturers as well as brand and retailers on board is key to achieve real change. By 2030 we aim for a significant fraction of our products to be either sourced through paths alternative to the traditional petrochemicals, or by upcycling waste and/or byproducts from other industries.

“This is the kind of genuine, tangible, environmental consciousness that truly defines us and that entails that RUDOLF GROUP has a responsibility for the needs of society as a whole.” Said Alberto De Conti, Head of Rudolf Fashion Division “We have a maniacal attention to the environmental impact of our operations and products. We have truly embedded in ourselves the notion that “sustainability” is a key issue and critical to the long-term survival of our company and of society at large. “

The combination of modern, real science and environmental consciousness leads to what RUDOLF GROUP call aspirational chemistry something unique and something that positions us as shining example and guiding light throughout the industry. That is, in fact, BETTER CHEMISTRY.

Two are the innovations rooted in aspirational chemistry that RUDOLF HUB1922 presents. The first one is our WASHLESS technology and the second one is a brand new launch: LASER SMOOTHER, which supports laser technology and helps creating much better denim looks.

HUB1922 WASHLESS, which can be applied to both denim and non-denim, is the simultaneous application of
-    proprietary fluorine-free DWR (Durable Water Resistance) based on biomimicry to repel dirt
-    anti-microbial, anti-bacteria and anti-viral, non-migrating chemistry to stop body odour.
The combination of the 2 translates into garments that don’t require to be washed as much.

Life cycle assessment studies on clothes, detergents and washing machines show that home laundering is always the most energy‐demanding period during these products' life cycle, even higher than production or transportation phases.

“WASHLESS aims at changing consumer habits in clothing maintenance to a more environmentally friendly direction and represents a change that is the most feasible and efficient. Making washing machines obsolete is impossible, but even though the technologies in clothes cleaning have improved greatly, the washing frequency has not been reduced. We own more and more clothing and wash it more frequently. This increased amount of washing counteracts the technological improvements in home laundry. “ said De Conti.

It is only by understanding the climate change impact associated with home laundering that product innovations and consumer education can be explored. Studies consistently show that a carbon dioxide reduction of 105 MT and electricity savings of 142 thousand GWh can be obtained by reducing home laundering, on average, by 1/3. This is roughly equivalent to removing 12% of the 140 M passenger cars in the US, or taking 23 coal power plants off the grid. In addition, more than 60% of water consumed while laundering (2,000 billion liters) can be reduced through these strategies.

Laser denim is the current dominant technology available to the denim industry to create locally abraded areas, vintage effects, whiskers, patterns, patches, and even intentional holes and tears in a garment. Laser technology uses less water, harmful chemicals (such as potassium permanganate) and energy to create a wide variety of denim looks.

However, laser is not always able to produce the desired look, on the desired fabric, in the desired time. Therefore, chemical companies have been developing laser boosters that can be pre-applied to the garments in order to intensify the effect of the laser to mimic heavier bleaching applications. Unfortunately, laser boosters can create blurred images where the definition is lower and the overall image less natural.

The brand new RUDOLF HUB1922 LASER SMOOTHER is an all-in-one formulation, very easy to pre-apply to garments before laser burning and that return a very natural image which is very similar to the highly desirable hand scraping. Laser smoother can be applied by traditional exhaust or through nebulization and it dries at normal temperature in normal tumble driers.  Advantages of LASER PRIMER are: 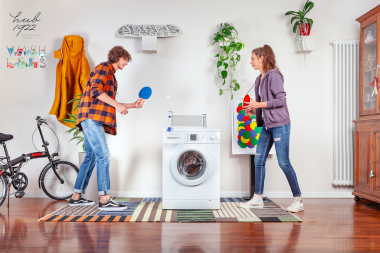 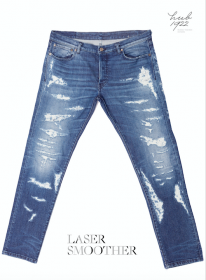 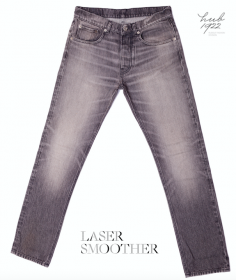