The 50th International Federation of Knitting Technologists (IFKT) 2020 Congress, which takes place in Belfast/UK from June 9-11, 2020, is focused on the latest scientific and technical advances and innovations in knitted textiles, bringing together various universities, research and technological centers, companies and all those interested in these diverse and analogous areas.
The congress aims to represent a forum for exchanging ideas, presenting the latest developments and trends, proposing new solutions and promoting international collaborations. Topics include, among others, innovation in knitting technology; technical textiles; and finishing treatments of the knitted fabrics.
The federation invites the submission of abstracts for oral or poster presentation at the conference, with the deadline for submission of February 21, 2020.
For further information: www.ulster.ac.uk/conference/50th-ifkt-international-conference 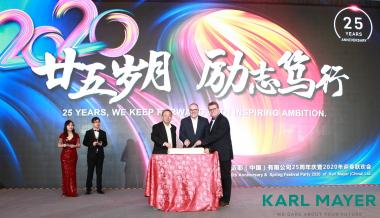 On January 17, 2020, Karl Mayer (China) Ltd., Changzhou/China, subsidiary of the textile machinery manufacturer Karl Mayer Textilmaschinenfabrik GmbH, Obertshausen/Germany, celebrated the Chinese New Year as well as its 25th anniversary. The company-wide event was held in Changzhou.
The beginnings of the company date back to 1995 when Wujin Textile Machinery Co, Ltd. was founded as a joint venture with a Chinese partner. Just 4 years later, Karl Mayer acquired all of the shares in the joint venture. Together with Nippon Mayer, the manufacturer set up Karl Mayer Textile Machinery Ltd as its own entity in Changzhou, and in 2005 formed Karl Mayer (China) Ltd. In 2008, the company moved to a new plant with a surface area of 170,000 m². In 2011, the production of knitting machines was expanded to include the manufacture of warp preparation equipment and in the following year, production was expanded again.
The latest milestone in the company’s history was the establishment of KM.ON China – a subsidiary of Karl Mayer’s software start-up KM.ON – in June 2019.
Karl Mayer (China) Ltd. currently employs around 800 people in Changzhou.