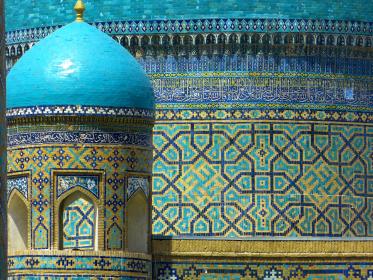 Tashkent (GTAI) - Uzbekistan wants to become an international player in the shoe and leather industry. The market offers foreign companies a lot of potential for cooperation.

The Government of Uzbekistan has adopted a new initiative for the modernization and expansion of the leather, footwear, leather goods and fur industries. It is aimed at increasing efficiency and expanding production as well as accelerating integration into the international market. Producers are focusing primarily on Russia and Kazakhstan, but also on Western markets such as France. Foreign companies are welcome to participate in the planned projects. In the long term, value chains are to be created, clusters established and exports promoted.

Tashkent (GTAI) - Uzbekistan wants to become an international player in the shoe and leather industry. The market offers foreign companies a lot of potential for cooperation.

The Government of Uzbekistan has adopted a new initiative for the modernization and expansion of the leather, footwear, leather goods and fur industries. It is aimed at increasing efficiency and expanding production as well as accelerating integration into the international market. Producers are focusing primarily on Russia and Kazakhstan, but also on Western markets such as France. Foreign companies are welcome to participate in the planned projects. In the long term, value chains are to be created, clusters established and exports promoted.

Cooperation with Uzbek companies are possible in the production of leather goods, passive contract finishing, supply of equipment, auxiliary materials and chemicals to companies or in the trade with footwear, leather and fur goods. There are plenty of high-quality raw materials and a large potential of available and motivated workers.

The framework conditions for companies in Uzbekistan have improved noticeably. Labor and energy costs are low. In 2017, the government initiated economic liberalization and opening of the country. Uzbekistan wants to more than double its shoe exports by 2020. In 2017 Uzbek manufacturers sold shoes worth USD 150 million abroad.

Foreign investors are planning new projects
The O´zcharmsanoat's key 2019 investment program lists projects valued at USD 52 million. In addition, there are other projects which have not yet been included in the program due to ongoing coordination with potential foreign investors or which are planned in companies that operate outside O´zcharmsanoat.
An overview of current and planned projects for the development of the leather, shoe, leather goods and fur industry in Uzbekistan can be downloaded here.

Association O´zcharmsanoat is the main contact partner
The Association of the Leather Industry O´zcharmsanoat acts on behalf of the state as the central regulator and coordinator of the sector. It was restructured in May 2018 and controls, among other things, investments and foreign trade. Almost all notable Uzbek players in the leather industry are active under its umbrella. These include 30 automated slaughterhouses (supplied by livestock farms), 63 tanneries, including pre-tanning facilities, 131 shoe manufacturers and 28 producers of other products, including fur products (as of June 30th 2018). It also operates 13 warehouses for the purchase of raw materials from private animal breeders.

The leather processing companies produce hard leather (foot and insole leather) and upper leather, mainly chrome leather goods and Russia leather. The annual raw material supply amounts to around nine million hides and five million skins. About two fifths of this volume is currently exported. Among the 252 companies, which are employing about 26,000 people, there are 47 companies with foreign capital participation as well as numerous purely private Uzbek companies.

Only about a dozen of the 131 shoe manufacturers, which are currently active at O´zcharmsanoat, employ 100 people or more. The development of efficient medium-sized structures in the sector is still in its infancy and is likely to gain momentum.

Government grants tax and tariff preferences for five years
The slaughterhouses and manufacturers of raw, semi-finished and finished goods as well as the new foreign trade company Uzcharmimpex will receive tax and customs relief. These apply to existing companies of the association O´zcharmsanoat until January 1st 2023. Newly established companies can benefit from the preferences for five years from the date of company foundation.
In detail, the following preferential conditions are granted:

The industry modernization initiative also provides for the creation of an industry development fund. This is fed by a levy amounting to 5 percent of export earnings from chrome-tanned hides and skins that have not yet been dressed (wet blue). These funds are intended for investment projects, the granting of loan guarantees, the financing of ISO certifications, the promotion of trade fair participations and the promotion of training and further education.

Usbekistan doubles shoe production
According to the Association of the Leather Industry O´zcharmsanoat, about 40 million pairs of shoes were produced in Uzbekistan in 2017, including 17 million pairs of full and partial leather shoes. An output of 34.2 million pairs of leather shoes is planned for 2020. Then the leather production is expected to reach a volume of 1.3 billion square decimeters. For 2018, the association expects 1 billion square decimeters of leather. O´zcharmsanoat aims to increase its total exports to USD 480 million by 2020 and to USD 1 billion by 2025 (Actual 2017: USD 150 million).

The collapse of the Soviet Union, a failed privatization policy and a difficult business climate led to a breakdown in production in the mid-1990s to around 2009/2010. On average, manufacturers produced less than four million pairs of shoes a year. Previously, around 30 medium-sized manufacturers brought 50 million pairs of shoes onto the market each year. In addition, 2.4 million bags and 200,000 pairs of gloves were produced annually. After 2010, there was a start-up boom in the sector thanks to preferential tax arrangements for particularly small companies. 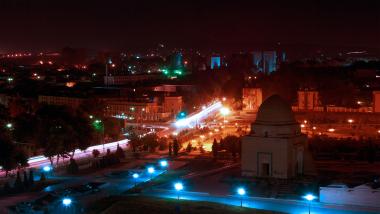 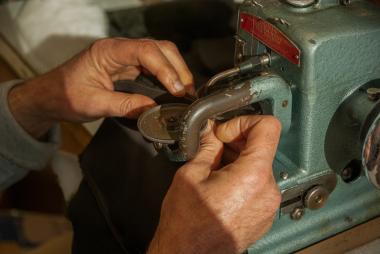 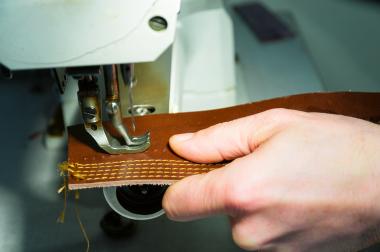 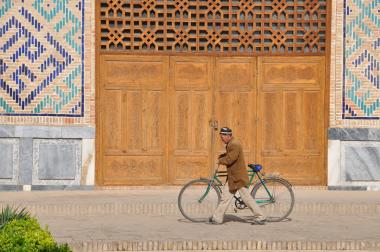 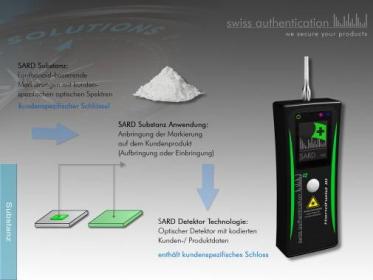 In 2014 German customs seized about 1.3 million counterfeit garments and accessories worth EUR 10.94 million. Particularly renowned brands suffer from piracy and try using different measures, such as hologram labels or special sewing yarns to protect their fashion - so far with little success, because professional counterfeiters can copy these marks most convincing.

In 2014 German customs seized about 1.3 million counterfeit garments and accessories worth EUR 10.94 million. Particularly renowned brands suffer from piracy and try using different measures, such as hologram labels or special sewing yarns to protect their fashion - so far with little success, because professional counterfeiters can copy these marks most convincing.

But that could change now: As the first brand apparel manufacturer the Swiss wederundgut ag recently added on their UNiSONO -Shirts a labeling with a lanthanide-based SARD - safety substance which is completely tamper-proof due to high-covalent and doped crystal lattice. It has a unique, tailored composition with individual emission spectra and can be detected and deciphered only with an especially for this application developed laser measuring instrument. The incorporation in a multi-layer, firmly with the shirt fabric glued label, the marking cannot be destroyed neither by the wash liquor nor by mechanical influences during the washing process.

"Brand counterfeiting is becoming more and more a problem for the fashion industry.  Especially well-known brands are suffering from the proliferation of plagiarism" Ueli Fish, CEO of wederundgut ag, explains. "It is therefore in our own interest as textile manufacturers, to find ways to make our products clearly marked as identifiable originals."

Within the sector many protective measures have already been tried, but without achieving a long term desired effect: One company for example works with holograms on the label. For professional plagiarists a hologram provides no bigger hurdle in these days, stated Dieter Ebert, CTO at the product protection specialist swiss authentication research and development AG (SARD) explains. As another possibility sewing threads will be soaked with safety fluids. "The disadvantage is that all known substances will sooner or later be completely washed out of the fabric in the washing process," the expert said. Several manufacturers of high-quality functional wear labeled their products temporarily with RFID chips. However, they also were destroyed in the washing process sooner or later - partly through the water, partially mechanically, so that this solution has been abandoned. Others prefer to educate their customers trying to explain differences between original and copied patches.

For the marking with the by SARD developed safety substance wederundgut ag decided due to the utter counterfeit security and adaptability for different applications. "The substance contains a custom mixture of lanthanides, which form a very complex, high-covalent and doped crystal lattice," the CTO explains. "In the production of a patented process at a defined point some foreign substances in the smallest amounts will be added that changes the emission spectrum significantly." By excitation in the UV or IR range the substance sends the customized optical spectra. These are stored in an associated detector, which has been developed by SARD for this application, and can only be recognized by the latter. All mixtures of the substance are stable at temperatures far above 1,700°C, resistant to acids, bases and radiation, highly resistant to chemicals and toxicologically safe. The particles, which generally have a size of about 1 to 10 microns, also allow no interactions with any other substances.

A decisive advantage of the substance is that the production process is not possible to replicate due to the artificial emission spectra: "Through the endowment spectra will be generated, of which it cannot be determined which elements are involved. Therefor a replica of the substance through reverse engineering is not possible, Ebert says.

Also the laser measuring device cannot be manipulated, since it has its own software and a virus free operating system and uses for algorithm and cryptography the FPGA technology. When evaluating the marking SARD also focuses on the key-lock principle: "The two independent emission spectra of custom substances serve as the key. They are stimulated and measured by the two independent laser systems of the detector”, so the CTO. “Decoding is performed with in the device stored, cryptographically encrypted information. They therefore act as a lock." Only when the correct substance is detected, a protected algorithm shows the customer-specific information on the display of the detector. This feature ensures a highly secure authentication.

In addition to the protection against forgery wederundgut is demanding further properties on the marking. "The label should not get an optically negative change, should be completely hypoallergenic and should remain from the cost point on an acceptable level," Fish says. The most important point for the textile manufacturer however was, that even after repeated washing the substance remains detectable: "That was at first a great challenge for us," Ebert says. "If we would have brought he SARD-substance in a conventional manner into the material, for example just with a color - as with solutions of other manufacturers - then there would have been the risk that the substance would be washed out by the surfactants of the detergent. Therefore we had to find at first a suitable carrier material. Together with the Munich label specialists RATHGEBER GmbH & Co. KG SARD finally developed a solution in which the substance will be incorporated into an iron-on label made of plastic composite material from which it cannot be removed. "This label is produced in several layers," Ebert says. "In one of them the SARD-substance will be incorporated and permanently sealed with another layer."

The label corresponds optically with the known company label of UNiSONO, the safety substance is difficult to detect with the bare eye. The final label is, among other things, resistant to alkalis, chemical cleaning agents, UV radiation, mechanical stress, acids, weather influences and keeps temperatures from -30 to 120°C. It will be ironed onto the shirt using a special hot-melt adhesive. This agent is very resistant and does not dissolve from the fabric, even at very frequent washing as is common for example in sports clothing. "At this project together with SARD we achieved great results very fast. With the current result, a very uncomplicated solution for us, we are very satisfied,” Fish explains, who puts the security label directly in the clothing factory on the shirts. “In the future we'd like to get a label that is even more soft and thinner than the current one. We intend to work on it together with SARD," the CEO said. 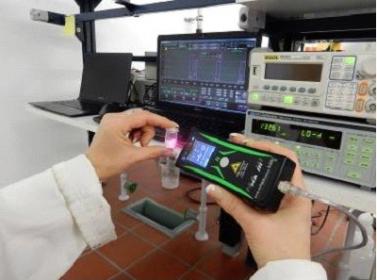 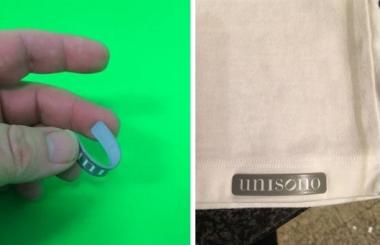 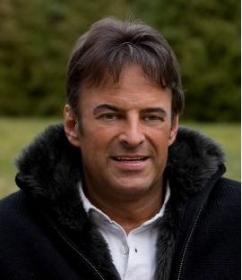 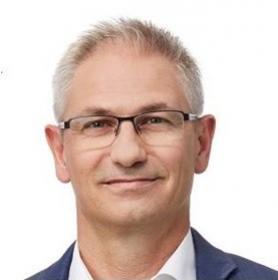