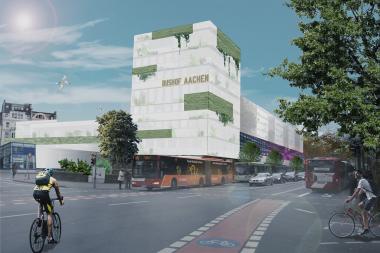 Researchers in Aachen/Germany have developed the adaptive textile facade green.fACade, which was presented on August 2, 2018, in the Aachen Faculty of Architecture of RWTH Aachen University. green.fACade is installed in front of a building like a 2nd skin and can permanently reduce nitrogen oxide pollution in cities.
The researchers achieved the reduction of harmful nitrogen oxides (NO and NO2) by coating the facade with titanium dioxide. Titanium dioxide acts as a photo catalyst and enables the oxidation of nitrogen oxides to form washable nitrate (NO3-). Since the facade is also greened, it contributes to the conversion of carbon dioxide into oxygen by photosynthesis. green.fACade is part of the innovative research project “adaptive textile facades”, which uses the special properties of textiles.