Direkt zum Inhalt
My Textination
About us 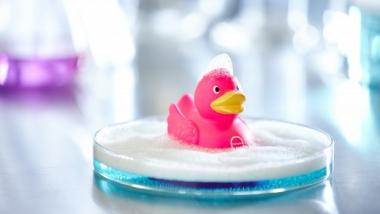 Washing with CO₂ technology could be a major milestone on the road to the Circular Economy. The specialty chemicals producer Covestro AG, Leverkusen/Germany, came another step forward in the ongoing development of its innovation on this front: As part of the "DreamResourceConti" project funded by the German Federal Ministry of Education and Research (BMBF), Berlin, the production of CO₂-based surfactants and how they can be used to produce sustainable detergents and cleaning agents is examined.
Together with its academic partners RWTH Aachen University, Aachen, and the Technical University of Berlin (TU Berlin), both Germany, Covestro has now succeeded in replacing part of the ethylene oxide (EO) from petroleum needed for production with carbon dioxide, making surfactant materials much more sustainable.
In the future, up to 25% of the conventional ethylene oxide could be replaced by CO2. In addition, initial tests have shown that the novel CO2-based material can be used in standard formulations for detergents with comparable primary washing performance. In the further course of the project, a detailed characterization of the new materials by the TU Berlin will provide further insights into potential fields of application so that CO2 can be optimally utilized as a raw material.