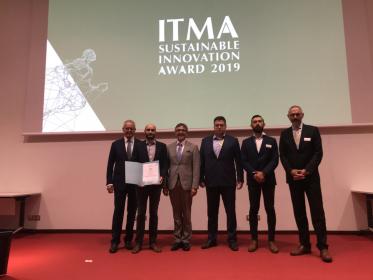 Mathias Zidda, MSc of the Institut für Textiltechnik of RWTH Aachen University (ITA), Aachen/Germany, has won the ITMA Research & Innovation Excellence Award, presented on June 20, 2019, for his 3D braiding machine which was rebuilt according to the 4.0 industry standard. Fritz P. Mayer, President of the European Committee of Textile Machinery Manufacturers (Cematex), Zurich/Switzerland, and the German Engineering Federation (VDMA), Frankfurt/Germany, handed over the prize money of €10,000 with certificate to the winner at the world’s leading textile and garment technology exhibition ITMA 2019 in Barcelona/Spain.
The 3D braiding machine consists of an existing conventional mechanical system. It has now been digitalized and rebuilt according to industry 4.0 standard. With the help of the digital control, for example, 3D reinforced ceramic turbine components can be manufactured as prototypes and subsequently produced in series. Together with the company ark industrie AG, Aachen/Germany, and 2C-Composites GmbH & Co. KG, Heinsberg/Germany, the control system was completely redesigned so that the machine can be monitored and operated from anywhere. 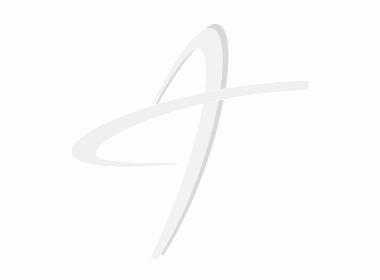 One of Europe’s largest denim producers, Candiani SpA, Robecchetto con Induno/Italy, has won the ITMA Sustainable Innovation Award, held in conjunction with ITMA 2019 in Barcelona/Spain. Its innovative product, Candiani Re-Gen is a ‘circular denim’ fabric created from regenerated and recycled raw materials.
50% of the Re-Gen fabric comprises Tencel x Refibra lyocell made of pulp from cotton scraps and wood pulp using the efficient closed-loop process from the producer of cellulosic fibers Lenzing AG, Lenzing/Austria; the other 50% consists of post-industrial recycled Candiani fibers. Candiani’s fabrics are also dyed using green technologies, resulting in substantial reduction in the use of water and chemicals in the fabric production and jean washing process. The fabric was created to commemorate Candiani’s 80th anniversary.
Nominated for the award by ITMA 2019 exhibitor Lenzing, Candiani SpA received the trophy from CEMATEX president Fritz P. Mayer, at a presentation ceremony on the opening day of ITMA 2019 on June 20, 2019. 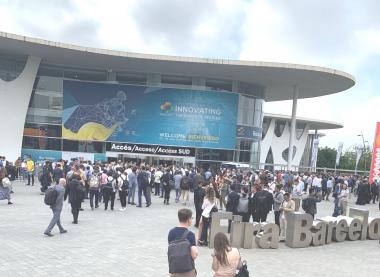 Since its launch in 1951, the ITMA has enjoyed wide industry recognition as the world’s largest textile and garment technology exhibition. This year’s event in Barcelona sees its reputation solidify further with the largest gathering of exhibitors in its history. The record number of exhibitors totaling 1,717 from 45 countries has set a new milestone.
The exhibits are showcased over 114,500 m² of net exhibit space, a 9% increase over the previous edition in 2015. The exhibition occupies all 9 halls of the Gran Via venue, including the space under the linkway. To allow more companies to participate, many exhibitors were allocated lesser stand space than they had originally applied for.
Reflecting the international composition of the participants, the largest number of exhibitors are from Italy (364 exhibitors), China (276 exhibitors), Germany (222 exhibitors), India (169 exhibitors) and Turkey (164 exhibitors).
CEMATEX countries continue to occupy the largest exhibit space, taking up 65% of the total net exhibit space. Italy booked 26% of the space, followed by Germany which booked 18%. The top non-CEMATEX countries are: Turkey with 9%, China with 8%, and India with 5% of the space booked.
A wide range of integrated solutions across the entire value chain in 19 exhibit sectors are present. Printing, which has seen many advances being made in the last few years, is an exciting growth sector. Chalking up a 38% increase in the number of exhibitors compared with the previous exhibition, it is one of the top 5 sectors at ITMA 2019: finishing (325 exhibitors), spinning (281 exhibitors), weaving (182 exhibitors), printing (157 exhibitors), knitting (136 exhibitors).
The nonwovens and technical textiles sectors, due to their wide range of applications, continue to be an important sector at the ITMA 2019. Garment making, which has been impacted by digitalization and fast fashion, is also making a bigger impact at the ITMA.