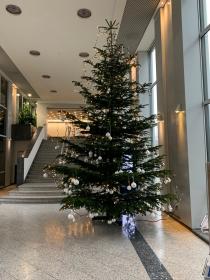 Times of social distancing have brought people more closely together than ever before. This is what we can build on for the future.

We wish you a Merry Christmas, a peaceful holiday season and a happy new year.

Keep safe and well through the holiday season. 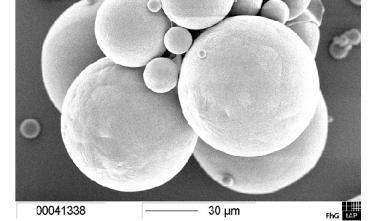 Bio-based substances recovered from waste could be used for water-repellent coatings on functional textiles. High-performance materials are currently being developed on the basis of raw materials produced from wastewater or waste, as well as other biogenic raw materials. Some of these have new and additional functions and are intended to replace petrochemical materials in the future.
In the EVOBIO project coordinated by Fraunhofer Institute for Interfacial Engineering and Biotechnology IGB, Stuttgart/Germany, 19 Fraunhofer Institutes are working on solutions for a sustainable economy by developing new concepts that utilize material flows in bioeconomy process cycles to produce optimized materials for innovative products.
The researchers have a wide variety of applications in mind: Proteins produced from rapeseed extraction meal, for example, serve as oxygen barrier layers on food packaging. Protein-based nanofiber materials from various raw materials, such as kidney beans and rapeseed, are used to develop filter materials, coating agents, or wound dressing materials, and nanofiber nonwovens are spun from rapeseed protein.
Protein-based materials with water-repellent properties are also being developed. In the future, they could replace halogenated hydrocarbons in the finishing of functional textiles. In combination with polyglucosamine from chitin, which comes from the shells and carapaces of crabs, shrimps, and prawns, the Fraunhofer researchers were able to demonstrate that functional layers with both water-repellent and water-vapor-permeable properties can be produced with bio-based and biodegradable materials. 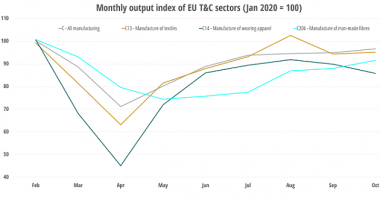 Euratex: recovery of European textile and apparel industry is uncertain

Despite some positive signals in the 3rd Quarter of 2020 (Q3/2020), the production in the European textile and clothing industry (T&C) is still negative shows the latest economic data released by the European Apparel and Textile Confederation (Euratex), Brussels/Belgium.
During the 3rd quarter of 2020, the EU turnover partially recovered as compared to the previous quarter, and retail sales of textiles, clothing, footwear and leather goods in specialised stores increased by 62% compared to the 2nd quarter. The EU27 production experienced also a rebound compared to the previous quarter with + 25% in textiles and + 33% in clothing.
However, the EU output reported a negative quarterly growth as compared with the same period of the previous year. The decline in the clothing industry was - 15%, while for the textile, it was - 7%. Spain and Italy recorded again the worst performances in textiles, with production drops reaching - 16.5% on average during the 3rd quarter, while Romania and Austria were severely hit in the clothing sector with respectively - 25% and - 31%.
Such data tells that the signs of recovery, noticed since May, are now slowing down, due most probably to the reintroduction of stricter measures in European countries. Faced with bad forecasts, Euratex, is calling the EU for an active engagement in crucial area like circular economy, digitisation and level playing field. 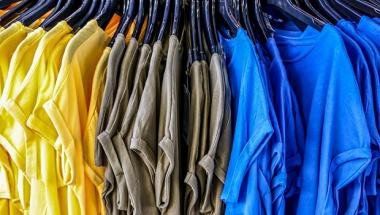 How is the impact of the Corona-pandemic on the global textile value chain? Between November 20th and December 14th, 2020, the International Textile Manufacturers Federation (ITMF), Zurich/Switzerland, has conducted its 6th ITMF Corona-Survey with in total, 159 companies, ITMF members and affiliated companies and associations, from around the world participated.
In comparison to the 5th ITMF Corona-Survey (September 5th – 25th, 2020), the turnover expectations for 2020 have improved in the 6th survey by 4 percentage points from -16% to now -12% compared to 2019.
For 2021 and the following years, turnover expectations have overall improved slightly. On average, the companies are expecting a small improvement from -1% (5th survey) to +3% (6th survey) compared to 2019. Also, for 2022 and 2023 the outlook has improved slightly from +9% (5th survey) to +11% (6th survey) and from +14% (5th survey) to +15% (6th survey), respectively. The turnover expectations for 2024 – compared to the 2019 levels – have not changed (+18% in the 5th and 6th survey).
Due to the reduced turnover drop of -10% in 2020, the industry is expecting to recover the losses incurred in 2020 by the end of 2022. 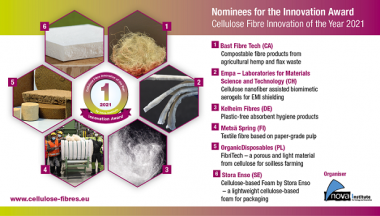 On February 2-3, 2021 during the 2nd International Conference on Cellulose Fibres as an online event organized by the nova-Institute GmbH, Hürth/Germany, the "Cellulose Fibre Innovation of the Year" title will be awarded for the first time to those for a development of new technologies and applications in the cellulose industry.
The 6 nominees are:
•    Compostable fibre products from agricultural hemp and flax waste - Bast Fibre Tech (Canada): compostable fiber products produced out of agricultural waste from hemp and flax processing. Using biogenic waste from the production of fast-growing crops instead of using wood or fossil resources is environmentally and economically more sustainable. Applications could be toilet paper and recyclable, thus flushable cleaning wipes.
•    Cellulose nanofiber assisted biomimetic aerogels for EMI shielding - Empa – Laboratories for Materials Science and Technology (Switzerland): cellulose-based aerogels with silver nanowires. The flexible composite blocks high-frequency electromagnetic radiation.
•    Plastic-free absorbent hygiene products - Kelheim Fibres (Germany): a plant-based fiber solution for absorbent hygiene products. It consists of 3 layers with different functionalities: a soft and breathable upper layer of Olea fiber which is water repellent and thus keeps the skin dry, a 2nd layer out of fibers with a Y shaped cross-section which, thanks to the capillary channels thus created, ensures an efficient distribution of liquids and an absorbent core.
•    Textile fibre based on paper grade pulp - Metsä Spring (Finland): a more energy-efficient process based on a new solvent family to produce man-made cellulosic fiber (MMCF). Using ionic liquids, the MMCF can be produced from paper-grade pulp.
•    FibriTech – a porous and light material from cellulose for soilless farming - OrganicDisposables (Poland): FibriTech is a new process for the production of porous and light material from cellulose and lignocellulose. A mixture of fibres can be used, including waste and recycled fibers.
•    Cellulose-based Foam by Stora Enso – a lightweight cellulose-based foam for packaging - Stora Enso (Sweden): It is designed as an eco-friendly alternative for fossil-based packaging and cushioning materials such as expanded polystyrene or polyethylene.
The “2nd International Conference on Cellulose Fibres” will cover the entire value chain from lignocellulosic feedstock, dissolving pulp, cellulose fibres – such as rayon, viscose, Modal, lyocell or new developments – to a wide range of applications, woven textiles (clothing) and non-wovens (wipes and technical applications). All these sectors have significantly gained momentum over the last few years. 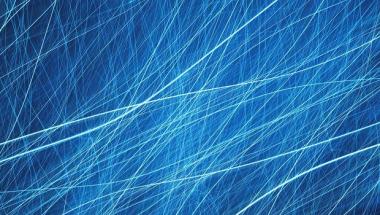 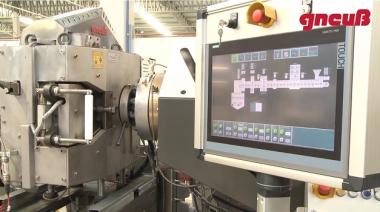 However, melt filtration should not have any disturbing influence on the production process. If inhouse waste and heavily contaminated post-consumer waste are added to the production process, foreign particles of various sizes and quantities are introduced into the melt flow. These have to be filtered out efficiently to ensure a consistent and high quality of the end product.
With the unique Rotary Technology, of Gneuß Kunststofftechnik GmbH, Bad Oeynhausen/Germany, the conditions in the melt flow are permanently constant, i.e. the pressure drop across the screen, respectively the amount of contamination on the screen, is kept constant, so that the line can always be operated in the optimum range.
This is achieved by the rotating movement of the filter disk, with which the screens are transported through the melt channel. A control system ensures that the screen contamination remains constant. As soon as the contamination load varies, the control system reacts automatically and changes the rotational speed of the filter disk. The pressure across the system thus remains constant. The only non-constant variable in the filtration process is the rotational speed of the filter disk. 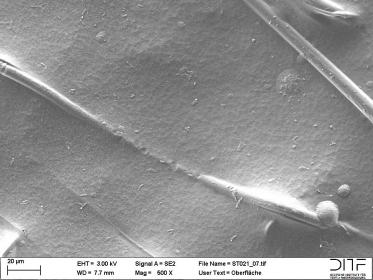 Regenerative energies are representative of the energy turnaround. However, it is also important to have ways of storing the energy generated. Water electrolysis could be a key technology. Hydrogen is a secondary energy carrier that enables efficient energy storage due to its high energy density.
In the joint research project “Electrolysis made in Baden-Württemberg”, the DITF are participating in the construction of a state-of-the-art electrolyzer for alkaline water electrolysis, which will serve to transfer technology to industry. The project is coordinated by the Center for Solar Energy and Hydrogen Research (ZSW), which will build the demonstrator with an electrical output of one megawatt. The task of the DITF is to develop and manufacture nonwoven-reinforced membranes for the electrolysis cell.
As part of the research project, membranes made of polymers are being produced at the DITF that are modified and thus precisely tailored to their task. The membranes exhibit excellent electrochemical properties. They are chemically stable in an alkaline environment, i.e. under the conditions that prevail inside the electrolytic cell. The membranes should also have good long-term stability. This means that they work almost faultlessly even under continuous stress. The membranes are inexpensive to manufacture and use. 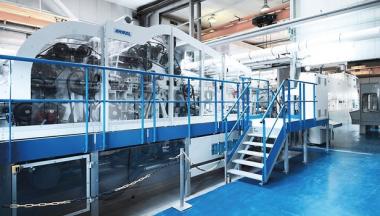 The international technology group Andritz AG, Graz/Austria, supports the nonwovens producer Suominen Corp., Helsinki/Finland, in reaching its goal to be a leader in innovation and sustainability for nonwovens.
Over the years, Suominen has modernized several machines and lines to a higher performance level. Andritz has supplied and upgraded several spunlace lines and most recently supplied a Wetlace line for production of high-quality products such as flushable wipes, baby wipes, personal care and household wipes.
In addition, Suominen and Andritz signed a service agreement for Metris Remote Assistance, which allows the Suominen equipment operators to have full online support from the Andritz process experts. 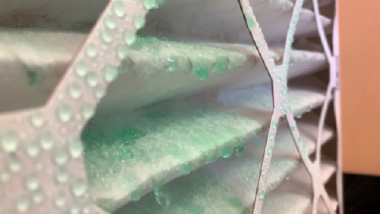 Prof. Shay Curran, Physics professor at the University of Houston, TX/USA, has developed a nanotech filter coating designed to allow air filters to capture airborne or aerosolized droplets of the virus that spreads Covid-19.
The coating works by capturing liquids which encase the virus particles while still allowing air to flow through unimpeded. That allows ventilation systems to remove the virus during normal operation, without retrofitting or limiting the system’s ability to draw fresh air.
Prof. Shay Curran’s company Curran Biotech, Houston, TX/USA, developed this hydrophobic coating already a few years ago to waterproof surfaces like masonry, wood and concrete. But recently, he shifted his focus toward the fight against Covid-19.
“Rather than just using a form of detergent to kill bacteria, viruses, or fungi in real time - having no lasting benefit - we address the problem of protecting buildings from transmission differently: a new methodology of stopping contagions at the surface of air filters. Our coatings reject liquid-based contaminants. SARS-CoV-2, for example, in its most infectious state is surrounded by a liquid mucus; using that knowledge we can physically stop the virus at the filter surface and capture it in our Capture Coating”, says Prof. Shay Curran.